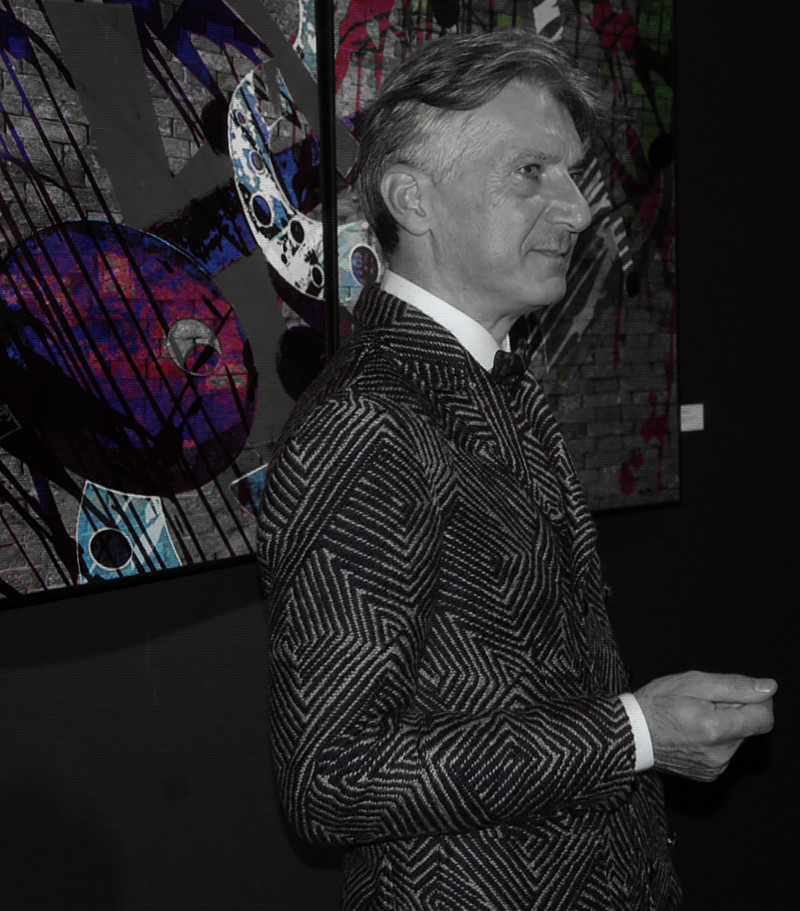 The list of territories explored is endless: Mazzetti, thanks to his lens captures not only architectural details but the more unusual aspects of urban design, whether they are archaeological sites or modern cities, returning each trip with images to add to a collection of material he has devised through the years that defines his own personal style and approach to working.

Antonio Mazzetti works in the Italian neo-classical tradition, mixing both the grandeur of past civilisations and the contemporary symbolism of today’s international metropolises. It is within the latter that the verticality of the skyscrapers reaches the sky’s immensity in a dialogue which recalls the creative force of man and his infinity. It is indeed this spirit that the artist brings to the foreground conjuring up architecture and archetypal sculptures which acquire their essence from eternal subjects devising a modern, yet timeless catalogue. To a certain extent Mazzetti resembles an archaeologist collecting distinctive material bearing cultural connotations , it is this concept he uses in order to establish images which the subconscious links immediately to the archetypes anchored in distant memories. For this reason his work catches our attention, both the vividness of its message and its kindling of the past. What is referred to here is characteristic of the Italian culture, that vital link with

the past, an attribute which surfaces continuously in Italian artistic production. The idea that time nourishes continuously opera which in turn creates the history of a civilisation is customary in this country and constant inspiration derives from memory. Greece and Ancient Rome represent indelible references where time rekindles in different forms. It is with this intention we can compare Antonio Mazzetti’s work with that of Luca Pignatelli, who is also strongly inspired by archetypes of ancient Greece to the present day , in a lyrical inspiration which ferments contemporary art. Time, memory, space archetypes are all the intangible components of Pignatelli’s work as is the distinctiveness of Antonio Mazzetti’s work. The latter, formalizes through recurrent themes, objects which evoke emotional or aesthetic sensations linked to collective subconsciousness. In fact he presents icons, figures of greek heroes such as Alexander, Atlas or Ionic goddesses, such as Venus, and other representations taken from the metopes of greek temples, Aphrodite, Artemides archetype beauty and symbols of a harmonious myth of grandeur. These figures which the artist uses as citations become memory or recollection, they want to be eternal. If Pignatelli’s work acquires ionic characteristics, it is in Mazzetti’s work they take on an incisive force.

Furthermore, in Mazzetti’s work the subject dominates the opera, through framed close- ups, searching for perspective effects. This technique is used both for antique themes and contemporary architecture where the photograph captures the more unusual viewpoint and impression by emphasizing detail, a shadow or particular hues of light. Antonio Mazzetti plays essentially with contrast, contrasting material by breaking up lines, creating a dialogue between shadows and light. From New York to Delhi, from Paris to Bangkok, whether it is the Eiffel Tower, a Manhattan skyscraper, a Nepalese Buddha or a Burmese stupa the images exalt the perfection of shape accentuating symbolism Focusing on the object the artist is able to reveal its more unexpected and unforeseen aspects. The Guggenheim Museum, Bilbao becomes a billowy spirited vessel in iridescent light; “Iridescenza” is the title of the photograph in which a range of colours , from blue to violet cancel shape/form by favouring light. The photographer thereby becomes a composer who challenges the rationality of geometrical shapes by benefiting/advantaging light effects. Dialogues between antique and modern constitute his photographs as in the Venus at the foot of a New York building, the bust of Maillol dominating the Grande Roue del Jardin des Tuileries . Antonio Mazzetti uses collage and juxtaposition of objects where messages weave a dialogue between epoch and culture.

Apart from Western/European Antiquity which the artist often portrays in enlarged photographs, Antonio Mazzetti also uses symbolic elements of Asiatic cultures. Burma, China, India inspires him to capture monumental figurations in which time seems to have stopped, as in the Burmese Buddha with its scaffolding erected for its restoration, the scaffolding in fact is identical to that used centuries ago. Often Mazzetti’s work conveys the eternity some cultures possess as in antique bas-relief figurations or the stupa with its bells perennially gilded by the sunset and again in the images of the closed red doors of the Forbidden City, Peking. History and memory provoke a construction of images which portray a particular intensity in the artist’s recent work where photographic technique embraces pictorial art. Since 2000, surpassing earlier work, Mazzetti has created photopainting which comprises of pictorial technique applied to the photographic image. The photograph becomes the foundation for a technique which enhances the subject and highlights the composition .Some images therefore become genuine collages in which both techniques are superimposed in the creation of a unique and original picture. The privileged subjects in these pictorial representations are antique Antonio Mazzetti intervenes by adding colour and writing, in addition , suffusing one colour which creates a image e.g. ivory “Fuga d’Amore”or “Centauromachie” enhanced by greek lettering. On other occasions the artist creates a different type of contrast by accentuating a particular element sometimes the sky, at times a architectural detail as in “Birmania” where the photograph is manipulated in electric blue with acrylic colours , highlighting the sky against the gold of the pagoda, a gold text deliberately juxtaposed ruptures the architectural harmony.

Antonio Mazzetti uses the same pictorial photographic technique to create decorative panels for refined interiors. Not only does the artist succeed in creating mural compositions which integrate perfectly in their surroundings he also forms a harmonious combination between the opera .and interior design concepts. The space created evolves around pictorial elements, definite images of artistic value which he incorporates and animates. This originality characterizes Antonio Mazzetti’s research, staging his work within a global concept enhancing both the artist’s work and the architectural arena in which it is presented.
His photographs are essentially inspired by monumental subjects and architectural elements even when sculptural, drawing attention to his fascination for vertical compositions and high buildings, towers, skyscrapers, slender columns, bell towers, and other elevated structures that aim for the sky. Mazzetti’s collaboration since 1990 with Studio Linea, an interior design studio headed by Angelo Brignoli and Antonio Feraboli, has allowed him to express freely his work within both the arts of Architecture and Design and for which he has developed a real passion .In fact as a young man, he enrolled at the Faculty of Architecture, although he didn’t attend the course it is this nostalgic sentiment which was exhibited at the Trade Fair “Abitare nel Tempo” at Verona 2001, which was the setting for interior furnishing; a whole mural of a neo-classical theme. This particular event demonstrated the use of photographs and pictorial photographs used in multiple assemblage creating juxtaposed panels which made up a polyptych. The subjects were thereby divided in sequence and arranged to form an image. This fragmentation however, is not incongruous, on the contrary it helps the integration of the opera in an architectural context. The image occupies the wall, it becomes the wall with its imposing decorative dimension . Antonio Mazzetti’s art acquires a certain theatricality. This technique is applied both to the photographs and pictorial photographs achieving perfection and dialogue in the components that make up the space.

Starting from photography, Antonio Mazzetti has developed his style through a complex procedure, from the image to the painted image his creation of unique work stage by stage has acquired today its real value within the progress of complex creativity based upon the staging of the opera.
The opera becomes decorative, a trompe-l’oeil, graffiti murales in an inspiration which mixes contemporary and antique, lessons in the history of art. Each opera is identified for its own uniqueness, whether in harmony or in contrast within the context it celebrates, remaining as a object of reference and a source of inspiration .